Since the evening of April 3, Jews throughout the world have been celebrating Passover. Passover marks the Biblical release of Israelites from bondage under the Egyptian Pharaoh.

One of the symbolic foods eaten during Passover is matzo, an unleavened ‘bread’ (some people would add far more quotation marks) that is made with wheat flour and water only. It commemorates the urgent escape of the Israelites, led by Moses, who left in such a rush that they baked their bread without waiting for it to leaven.

Why do I mention Passover? The keen reader will note that:

a) Passover marks the release of Israelites from bondage and
b) this is my last food blog…
but that’s not the reason!

I was reading the back of a box of Manischewitz matzos, and I saw the following: “Every time you open a packet of ketchup or soy sauce you can thank Jewish inventor, George Brusak, whose Bell-Pak and Bursa-Fill machines packed liquids, creams, powders, and solids into disposable sterile packets.” I just couldn’t pass over the opportunity to learn more (haha! “pass over… like Passover). But first, let me cite my source.

OK… uh… hmm… no author. Machischevitz Corporation…? Or maybe the back of the box is technically provided by “Jewish American Heritage Month”… uh… Company… ok… date: Passover-ish… 2014. Production code 0976B. So.

I will be looking for matzo boxes in the next MLA handbook.

This is a box of Manischewitz matzo boxes. This is a lot of matzo. It is not for the uninitiated.
http://thumbs2.picclick.com/d/l400/pict/161614895257_/Manischewitz-Matzo-Unsalted-80-Ounce-Box.jpg

Anyway: George J. Burskak (Apr. 18, 1913 – Apr. 15, 2005) was a notable Jewish resident of Milwaukee. He lived through two World Wars, the Great Depression, and the birth of computers. Woah… Bursak was born with dyslexia, a reading disorder that slows a reader and may make them more prone to error. As a child, dyslexia was still not well understood, and Bursak’s teachers assumed that he was not intelligent.  Throughout his life, he would grapple with dyslexia, and eventually wrote the book, “If I Can Do It, So Can You: Triumph Over Dyslexia”.

This is a photo of machinery. If you ever doubt how useful it is to spend time on the internet, know that there is a website all about lathes. http://www.lathes.co.uk/winfield/img3.gif

I also learned that in 1941, Bursak was the managing director of the The Service Health Club, Inc. It was located at 2124 W. North Avenue. This fact is unrelated to the rest of this blog.

Was this sign featured in the health club? I don’t know. (Photograph unrelated to blog post.)
http://www.kitsch-slapped.com/2011/05/sign-of-the-times-1940s/

While running manufacturing operations with his wife, Ida, Bursak developed medical supplies, a hand lotion, and THE REASON FOR THIS BLOG POST: one-time-use ketchup packets (though the packets can hold all kinds of stuff).

In “If I can Do It, So Can You”, Bursak writes: “Believe in yourself. Keep trying, and keep on trying again. Reach out to the people around you. And finally, give something back.” (qtd. in The Wisconsin Jewish Chronicle).

So where was I? Ah yes. Disposable sterile packets for sauces. Portable food is important. It’s important if you are…fleeing a wretched Pharaoh. It’s also important if you are buying food in one place and wish to consume it elsewhere (home, car, desert…).  Bursak’s innovation can be thought of as each of the following:

– an idea, for he first had the thought, “Hey, what if I squirt some ketchup into a packet so that people can carry ketchup around without having to literally hold the ketchup in their hands?”;

– technology, for Bursak developed the mechanical means of filling these sterile packets;

– product, for disposable ketchup was not available until Bursak made it so; and finally

– service, for though this is a bit iffy, the portability of the ketchup has value to it and could be considered a service of sorts. 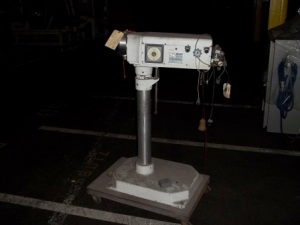 Finally, a relevant photo! This is a Bursa-Fill machine. http://allfoodequip.com/UImages/422a30dc4540b8ce26ececf1edf5dab1.JPG

The importance of this innovation has led to: portable, fast-foods as well as THE ABILITY TO MAKE YOURSELF SUSHI AND THEN BE SAD BECAUSE YOU HAVE NO SOY SAUCE BUT THEN BE HAPPY BECAUSE YOU FOUND SOME SOY SAUCE THAT WAS IN YOUR FRIDGE, HIDDEN UNDER SOME JARS, WAITING FOR YOU IN ONE OF GEORGE BURSAK’S LITTLE PACKETS.

Before George Bursak’s machines, this is probably how people had to bring ketchup home from the restaurant.
http://www.frenzyuniverse.com/blog/wp-content/uploads/2010/04/CleaningPennies02.jpg

Thank you for reading! It has been an honour to food-blog you all!